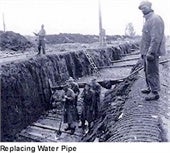 Since time immemorial, the Puyallup Tribe and other Coast Salish peoples have lived in the area we now call Tacoma. Their stewardship of the land over the millennia ensured that fresh water was available for all life.

When Tacoma was first settled by Europeans in 1852, settlers obtained water directly from springs and shallow wells. Several small distribution systems were developed beginning in 1873. Many of those systems took water from larger springs and tunnels driven into a hillside and transmitted the water to their destinations using bored-log pipes.

In 1884, Charles B. Wright obtained a franchise for light and water systems and incorporated the Tacoma Light & Water Company. During the next five years, he built a system that drew water from the Galliher and Tacoma Eastern gulches, Tule and Spanaway lakes, and Clover Creek. Tacoma residents were generally dissatisfied with the quality of water and service provided by Tacoma Light & Water. The City Council began negotiating with Wright in 1890 to buy the water and light plants.

After much political wrangling, the City Council and Wright agreed to a price of $1.75 million and put the issue before the voters. The vote was 3,195 in favor of purchase and 1,956 against — 104 votes more than the three-fifths majority needed. On July 1, 1893, the City of Tacoma became the proud owner of a suspect water system and the meager beginnings of an electric utility.

Increasing population and poor water quality created a strong demand for additional water. The first expansion was the lease of additional water from an industrial well in South Tacoma for fire protection. After the initial lease in 1903, Tacoma Water began developing its own air lift wells: two or three in 1903 and 16 more (11 successful) in 1906-07.

In 1910 the City Council authorized construction of the Green River gravity supply system. This line, running 30 miles from the west slope of the Cascade Mountains to Tacoma, was completed May 8, 1913. Clearing the site for McMillin Reservoir required horsepower as well as human power.

The Green River gravity supply system was originally constructed with wood stave pipe, which was replaced with either concrete or steel pipe in the 1920s, ‘30s and ‘40s.

Replacing the old air lift wells began in 1929 when Wells 1A through 5A were drilled in South Tacoma. Many additional wells have been added in the very productive South Tacoma groundwater aquifer, plus other wells both inside and outside the city.

Over the years, Tacoma Water has continued to make many system improvements including completing a second pipeline in 2006 and building the Green River Filtration Facility in 2015. However, the original gravity-based system remains the principle water delivery method to meet the needs of Tacoma.