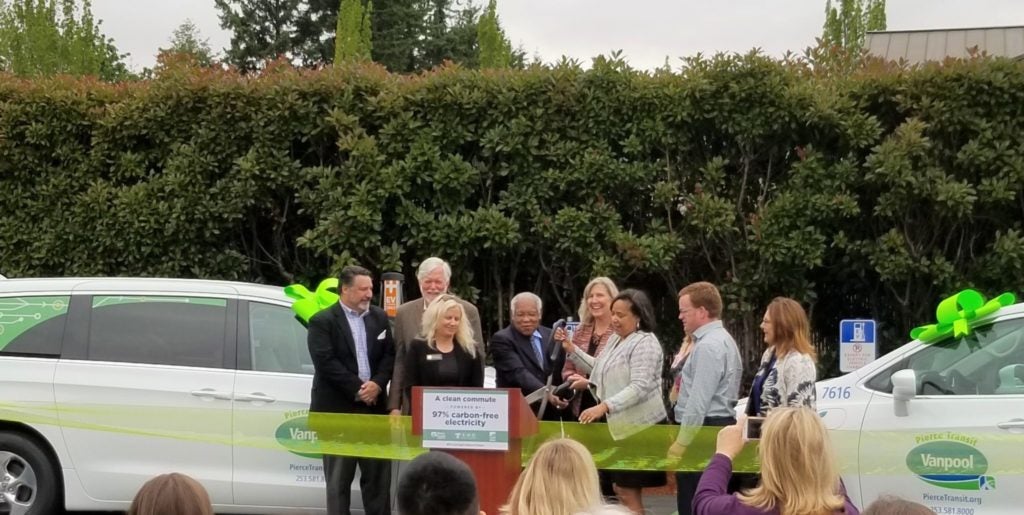 “Pierce Transit is a national industry leader in providing innovative, environmentally-friendly transportation options,” said Pierce Transit CEO Sue Dreier. “Like Pierce Transit, Tacoma Public Utilities also has a strong commitment to sustainability. It seems fitting for our two agencies to partner on such a promising new program that has the potential to reshape the future of ridesharing.”

Pierce Transit’s Electric Vanpool Pilot Program will provide eight TPU vanpool groups with a clean commute powered by 97 percent carbon-free electricity. The plug-in hybrid Chrysler Pacifica vans will run 32 miles on battery power before needing to be recharged or tap into gasoline. Vanpool drivers will drive the vans to work, charge them on site at TPU during the day, and drive home on carbon-free electric power, depending on speeds and total round-trip miles. Vanpool groups selected to use the new vans will arrive at TPU from a variety of locations, including Bonney Lake, Spanaway, Puyallup, Port Orchard and Tacoma. The eight electric vans will eliminate about 56 tonnes of CO₂ emissions a year, equivalent to 6,000 gallons of gasoline. The switch also reduces greenhouse gas emissions equal to more than 136,000 miles driven.

Tacoma Public Utilities was the first organization to offer infrastructure to support the pilot program.

“We have the opportunity to lead by example in our community and prove the benefits of a carbon-free commute,” said TPU Director Jackie Flowers. “We know that we need to make changes now to reduce Tacoma’s greenhouse gas emissions, seventy-three percent of which comes from fossil fuel-dependent vehicles. Not only will these vans be powered by electricity, by charging here at TPU, they will be powered by some of the cheapest and cleanest power in the country. We’re proud that Pierce Transit chose us to set the example.”

The eight new hybrid electric vanpool vans were acquired through a grant from the Washington State Department of Transportation’s Vanpool Investment Program, with the state funding nearly 80 percent of each $42,000 vehicle. If the Electric Vanpool Pilot Program proves successful, Pierce Transit hopes to acquire more hybrid electric vanpool vans and offer the program to other customers and employers.

“The transportation sector accounts for nearly 50 percent of the state’s greenhouse gas emissions,” said Transportation Secretary Roger Millar. “Investments in electric vanpools, such as these, not only take vehicles off congested roadways, but also help Washington create a cleaner environment and sustainable transportation system for current and future generations.”

Pierce Transit was one of the nation’s first transit agencies to run the majority of its bus fleet on clean, compressed natural gas in the 1980s, and recently purchased its first all-electric buses. Just eight percent of the agency’s fleet run on diesel, a number that will continue declining as more all-electric buses are purchased to replace retiring diesels.

Over the past several years, Tacoma Public Utilities has been part of a city-wide effort to reduce carbon pollution through electric vehicles (EVs). They have committed to increasing their own EV fleets, have worked to educate customers and employees about the benefits of electrification, and worked to make charging more accessible for the community. 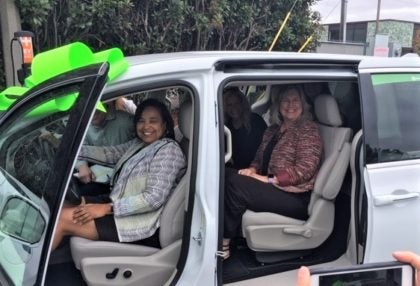