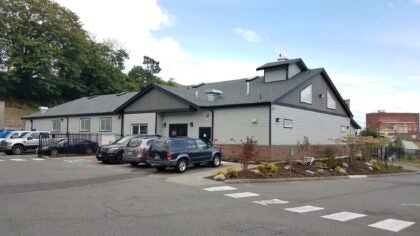 For more than 100 years, the Tacoma Rescue Mission has been doing critically important work in Pierce County. Building a brand new women’s shelter, with the help of City of Tacoma, Tacoma Public Utilities, Pierce County, and others, is a another important advancement for our community.

Duke Paulson, Executive Director of Tacoma Rescue Mission, noticed a lack of beds available for single women. “After dinner I noticed when people were leaving, men would go left to the shelter for the night and women would turn to the right,” Mr. Paulson said. “When I asked where the women were heading, I was told nowhere and that there were more beds available in the city for single men and families than there were for single women.” A short time later, the city approached the Mission with funding to be used toward increasing shelter beds and the idea of a women’s shelter took root. Soon after, the City approved the conversion of the Mission’s storage warehouse, put $1.6 million toward the project, and supported them through the permitting process. The new shelter doubles the capacity of available beds in the city for women and has sleeping quarters, bathrooms, and laundry facilities. Women can access meals and case management at the Mission’s main downtown campus, right across the parking lot from the new shelter.

They also committed to being good environmental stewards and building the women’s shelter to last. LED lighting is used with variable settings for ambiance inside and for safety outside. An energy efficient HVAC system was a high priority to have an abundance of consistently fresh air flow. Working with Tacoma Power, they received $3,125 in energy efficiency rebates for lighting, smart thermostats, and HVAC equipment. Their total energy savings is 13,779 kWh, which is enough energy to power a Tacoma Power home for one year! 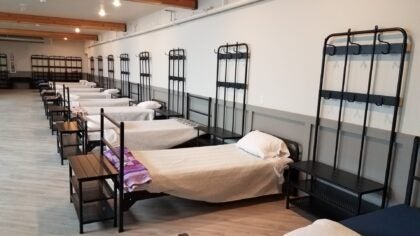 The new shelter doubles the capacity of available beds in the city for women.

“The project has been a really amazing collaboration with everyone involved,” Mr. Paulson added. “It took 13 months to develop and build a safe space for people in need to feel welcome, and we did it under budget. It was a fun project to be a part of.” Future projects include a new HVAC system for the men’s shelter to make the space as safe as possible to allow it to continue operating for years to come. They will take what they learned on this project and apply it to the next chapter, which is sure to be another success story. To learn more about the Tacoma Rescue Mission, visit their website at trm.org.