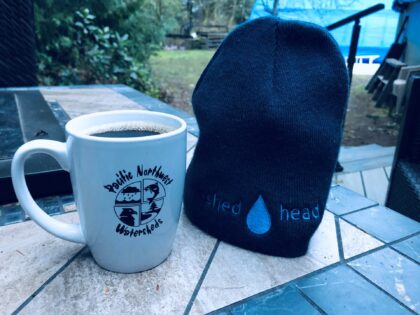 Hey Shed Heads, don’t know about you, but winter feels like it’s dragging on much too long this year. Perhaps it’s the La Niña that we are facing here on the West Coast; making the weather a little colder and a little wetter than normal. Or, maybe it’s the perpetual low-grade depression that comes with a year of physical distancing and mask–wearing. At any rate, spring is around the corner, and I am so looking forward to it. I’m sure you are too.

Of course, spring comes a little slower to our watersheds. The Green River Watershed has had a nice snowfall this year. As of mid-February, we are at about 110% of the average. Hopefully, this will translate into a slow, prolonged runoff to fill the Eagle Gorge Reservoir.

Even though spring may be a little delayed, our Watershed Services team at Tacoma Water is busy with several projects and planning for the coming year. Go and grab a cup of coffee then take a few minutes to read about what we are up to. If you get bored with that, we also have a new illustrated map activity booklet about our water system that you can print and color. We developed it to help school children in our service area learn about their drinking water and designed it at a level where even non-engineer managers like me can grasp the concepts.

Before I let you go, let’s be thinking about how we can connect more frequently. Now that we are all used to Zoom, Microsoft Teams, GoToMeeting, etc., I don’t see why we have to wait for a formal annual meeting to connect and talk to each other about the things that watershed managers deal with and are considering. If this resonates with you, drop me a line so we can set up some time to talk.

By the Playbook - Building a Great Watershed Team

When you look at successful sports franchises, they put a premium on first acquiring great talent and then on player development.  The development of a player focuses not only on individual performance but on adapting to the team’s playbook, so a player’s individual accomplishments contribute to the overall success of the team.

Acquiring great talent usually starts at the draft (e.g., professional football or basketball). However, it’s really the needs of the team that dictates where you search for talent. Rather than drafting rookies, some teams need veteran players to steady a young team to achieve success. With others, it’s about hiring the right coaches or a head coach/general manager to guide the acquisition of talent, player development, and formulation of the playbook.

Taking this analogy back to the watershed, Tacoma Water has a great team of talented professionals who do an exceptional job of managing the day-to-day watershed operations and natural resources work under the leadership of Jarrod Kaiser and Tyler Patterson. What has been missing is that head coach/general manager to provide overarching leadership, policy development, and direction to the team; as well as represent this important body of work in our governance and public-facing forums.

I’m happy to report that Tacoma Water has this need no longer. 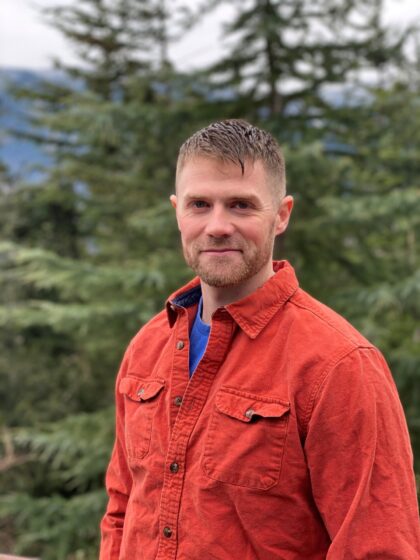 On March 1, Jesse Narog joined Tacoma Water as our assistant division manager for the Watershed Services team. Many of you know Jesse. He spent the last seven years at Seattle Public Utilities primarily serving first as a forest engineer, then as the watershed operations manager. He also spent a period of time as interim watershed division director, which was the position previously held by Suzie Flagor, and currently by Amy LaBarge. He has been to many of the PNWM meetings over those years.

Jesse is very familiar with the Green River Watershed. Prior to his employment with SPU, Jesse worked for Hancock Forest Management on the White River Tree Farm, which is partially located in the Green River Watershed. Before that, he interned with Pacific Forest Resources, which is a forest road engineering firm that has done a considerable amount of work in our watershed.

Jesse holds a Bachelor of Science in forest engineering from Oregon State University and served in the U.S. Marine Corps for over seven years. Part of his time was spent as a platoon sergeant and a platoon commander, where he served in several locations including Iraq. As a leader, Jesse is decisive and values the professional development of his team. When not working on watershed issues, Jesse is passionate about helping people in foreign countries achieve a better life. He regularly leads like-minded military veterans on humanitarian missions to countries such as Guatemala, Mexico, Cambodia, and Thailand.

Please join me in welcoming Jesse Narog to Tacoma Water. He can be reached at 253-331-3232 (cell) or jnarog@cityoftacoma.org.

How employees use stories to educate the public about their water

Watershed staff Tyler Patterson and Natalie Jones began contributing a new feature in our employee newsletter to highlight the many species present in the Upper Green River Watershed. As the feature articles gained momentum, we also began to use the stories in our social media posts and e-newsletter to help our customers understand the incredible ecosystem that helps deliver their drinking water. 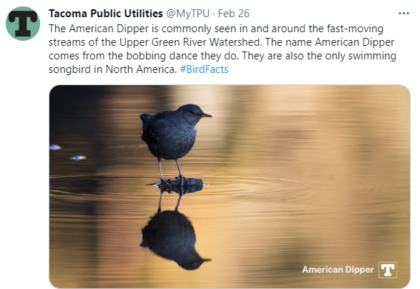 For those who attended the 2019 PNW Watershed Managers meeting in Tacoma, you may remember this spot! On the field trip day out to the watershed, we enjoyed a lovely luncheon on a piece of land formerly used as an airstrip and recently acquired by Tacoma Water. 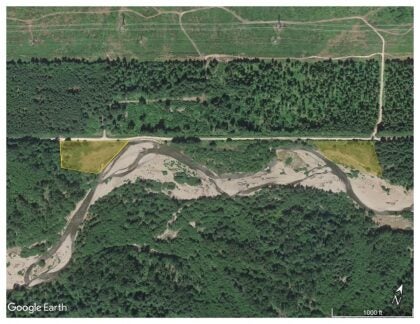 This land, adjacent to the Green River, has been substantially eroded by the river, and is choked with a plethora of invasive species (including many robust Scotch broom shrubs). The washout led to a road reroute and has negative implications for both water quality and fish habitat.

Tacoma Water had developed plans to restore the property in the coming years using internal resources as time and money became available. In early 2021 the utility had an opportunity to apply for federal grant money for a restoration project.  We partnered with Conservation Northwest (a local nonprofit) and applied for a grant to help restore this site with an accelerated timeline and more public outreach. A few days ago we received word that the utility will receive the funding, and the project will move forward. With the help of this funding and partnerships with CNW, Washington Conservation Corps crews, and the U.S. Forest Service, we will remove the invasive species and plant over 3,000 native trees and shrubs on this 4.1–acre area. And this is just the beginning! Tacoma Water plans to apply for additional funding next year to continue restoration on an adjacent site, improving the river water for humans and fish. 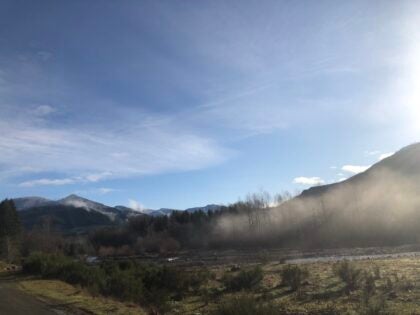 As many of you will remember from our last watershed managers meeting in Tacoma, we visited a potential timber harvest in the watershed (18–mile thinning). Since then, Tacoma Water has harvested the timber and thought we might share how it went. The proposal was to thin approximately 50 acres under the guidelines listed in our Forest Management Plan and Habitat Conservation Plan (HCP). The focus of the harvest was to accelerate and enhance natural processes of stand development. This thinning project is one of the strategies developed in the Forest Management Plan and HCP to improve wildlife habitat. 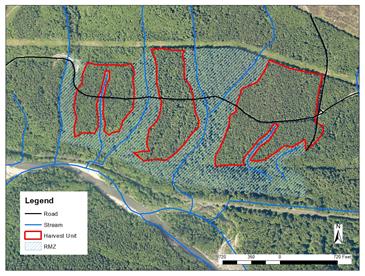 As a result of management, some areas of Pacific Northwest forest landscapes are currently over–stocked with high proportions of even-aged Douglas fir trees compared to what was historically present. Thinning these stands is a strategy to reverse this trend and put forests back into a more appropriate trajectory to achieve old–growth characteristics, a goal of our HCP. 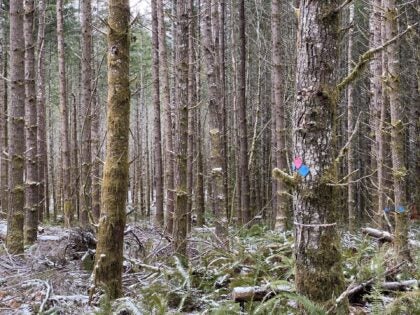 The stand prior to thinning – it’s pretty dark in there! 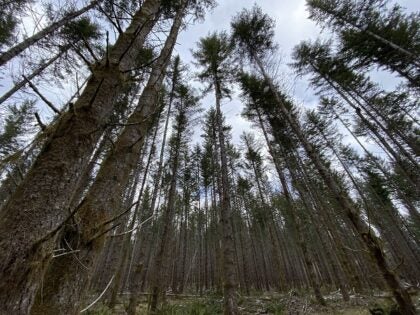 After thinning the trees have room for growth in the canopy.

We will monitor the stand to ensure shade–tolerant species begin to develop in the understory. If these species do not establish on the site we will subsequently replant them with a combination of western hemlock and western red cedar. This harvest generated about $183,000 for the City of Tacoma. 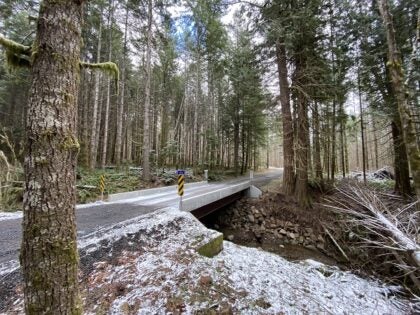 The fish barrier culvert corrected with a bridge. This is within the riparian area of the timber sale.

Tacoma Water’s properties and pipeline rights-of-way are numerous. As a result, we are regularly required to do mitigation work on various sites due to pipe maintenance, building expansions, and capital projects. These mitigation projects are often relatively small in scope yet Tacoma Water almost always contracts out plant acquisition and installation at considerable cost to the utility and, by extension, our customers. I believe that we can do better. We have staff with the expertise to set up and run a small native plant nursery at a relatively low cost, and we now have a full team with easily enough people to complete smaller-scope plant installations. These could ensure higher quality in both plant material and installation processes.

With this in mind, we embarked on a new pilot project to set up a small nursery near our office. Tacoma Water already owns this property, a homestead with a fenced garden and several log structures on–site (with power and water). We were able to acquire containers and potting soil free of charge through a partnership with the City of Tacoma. And the best part, all plants are currently being sourced through salvage within the watershed itself: we identify sites slated for logging, thinning, and other potentially destructive actions, and salvage understory plants ahead of proposed actions.  As we build the project we also plan to include some propagation and seed increase to the nursery’s functions. 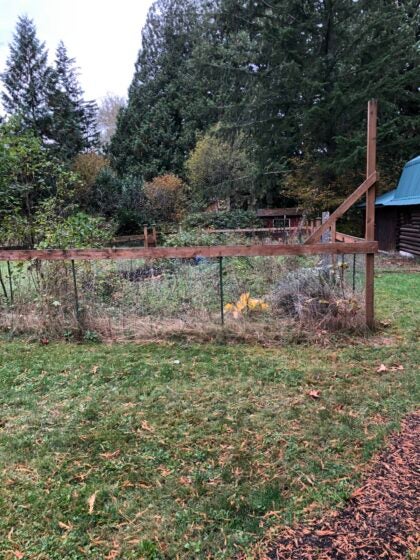 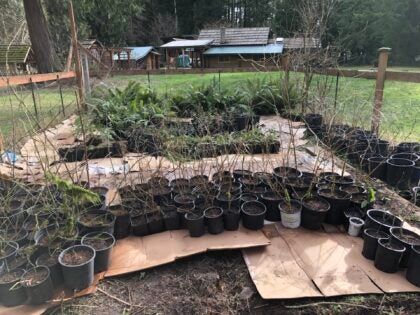 So, we hope you enjoyed that cup of coffee and the time you spent reading and coloring! It’s been nice to share with you some of the projects the Watershed Services Team has been working on. As you all know, we spend a lot more time on operational activities. Today, we battle snow, wind, and downed trees to re-open access to our well field and substation. Tomorrow, it will be another adventure.
We look forward to our virtual time together at the Seattle meeting.Cheers from Tacoma!
Close