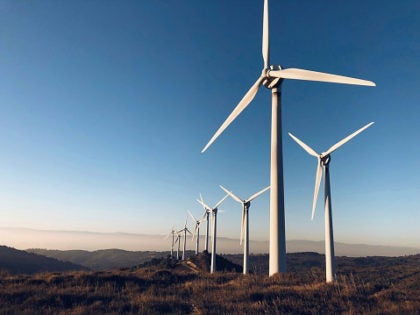 Wind energy has been around for thousands of years- from powering a sailboat to pumping water or grinding grain.  More recently wind power has been viewed as a clean and renewable alternative to burning fossil fuels in the production of electricity. Once the wind turbine and transmission infrastructure is in place, the “fuel” is basically free. However, wind energy is somewhat site specific and isn’t available at all locations or at all times. To be effective, wind turbines must be sited in areas with the most plentiful and consistent wind. However, unlike hydropower where water is held behind a dam for use in generating electricity as it is needed, there is no way to “store” the electricity generated from the wind, so electricity is produced when the wind blows regardless of need. Because it is an intermittent energy source, integrating electricity produced by wind onto the grid is somewhat difficult. Despite these challenges, wind energy generation is one of the fastest growing forms of utility scale electricity generation worldwide.

How does wind electricity generation work?
Wind turbines are mounted on a tall tower– winds at higher altitudes are generally stronger than winds at the earth’s surface –blades catch the wind and as they turn around spin and spin a turbine which generates electricity.The longer the wind blows, the more electricity is generated.

So why isn’t Tacoma Power using more wind power?
While wind is a renewable resource, Tacoma Power already has hydroelectric resources which do not emit carbon dioxide and provide reliable, low cost electricity. About 90% of our resource portfolio is hydro, 40% of which we own and operate. We currently have more electricity than we need. Excess electricity is sold on the open power market which keeps our customer’s rates low.  At this time the installed cost of electricity generated at a new wind farm exceeds the cost of our own hydro generated electricity as well as the current and forecast price of electricity on the open market. Currently, investment in a wind farm isn’t necessary and would increase the cost of the already carbon free electricity for our customers.